Small magnetic (H) antennas (Loops) have a good efficiency for the upper bands (20/15/10 meterband) and also in contrast to E-antenna a defined radiation direction.

EH antennas are supposed to combine the magnetic (H) and the voltage properties (E) so, that isn't phasedrift between E+H. So the antenna is supposed to have also a good efficiency. You find many articles in internet.

Since 1998 you can find a good homepage from the (sorry silents key) OE7OKJ. There is a very nice building discription from his very, very short antennas for short wave (E-antennas) with all what you need for reproduce the antenna. And it's also costfree.

All antennas with voltage on the end plays with the same principle. All what you need is a good antennabook like "K.Rothammel Antennenbuch". I found patents for constructions those antennas and cable choke etc. already since 1932. The principle is a lambda/2 antenna. The first part is an open coax cable and a following lambda/4 radiater. With that no high-frequence-voltage goes back to the TRX, a cable choke must be installed (look in the Rothammel antenna book). The cable choke can be different. We know a high impedance parallel resonance circle or the typical cable choke with ferrite-ring and several turns coax cable around.

If the second part of the antenna a short ground plane (GP), so you have the typical construction very short antennas.

You see a resonat circle from a T2LT antenna. After the first construction, the antenna was build with a parallel circuit  (cover wave choke with high impedance). The current into the coax cable will by aneffekt. You see the open coax cable and the center conductor extension. Take a short GP cunstruction on the end and  again you have the typical short one. (From book Rothammel 10, page 122) 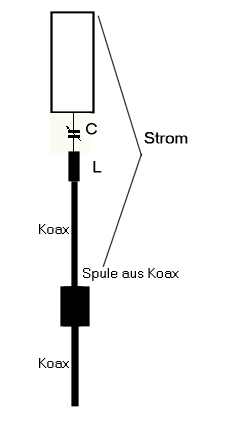 Already 1932 it was on idea the waves with same beat to oppress with a coil.

Picture 2 shows the application with "coaxial-coil". Also here  again the typical construction:coil, open coax cable, short GP. In the picture you can see a tuning capacity for the resonance frequence of the antenna circut. Very nice the current course. If you have very small antennas, the voltage along the open coax cable will have a connection to the earth, so that the voltage on the cable is very low. (From book Rothammel 10, page 123) 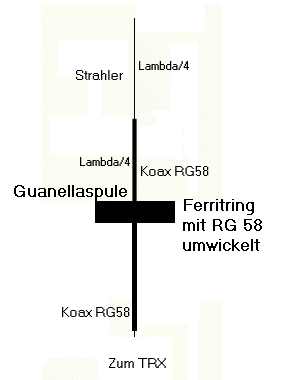 Now again the typical construction with braodband cable choke. This is exact what I use for my antennas. Cable choke with ferrite FT 140-43 and appr. 12 turns RG-58 around the ferrite ring. The lambda/4 radiator will be a short GP. This coax choke is a USA-patent from Harper, E.T.: patent No.: 3.576.578, 1967.

Antiphased currents goes through the choke but same phased current will be choke back. (From book Rothammel 10, page 123)

Already in th '70th the principal of very short antenna was known. The German scientists Prof. Friedrich Landstorfer and Prof. Hans Heinrich Meinke published in a magazine "Nachrichtentechnische Zeitschrift Nr. 26, issue 11 from 1973" a referat with the headline"Ein neues Ersatzschaltbild für die Impedanz kurzer Strahler" .  Here I found the effekt very short antennas. You can download the PDF file in internet. Please write a letter (E-Mail) to the institut where Mr. Prof. Landstorfer is working (search with google etc.)

I hadn't problems to develop a mathematical formula with the form mx+b to calculate the capacity from the radiator. Next I calculate the inductivity with Thomsons formula. What we also need is the coil windings. I have also developed a special formula for that.

For more read the next side with calculation programs and more details, click here:  ==>>