Experience with the OUTBACK2000 antenna

If you have a question, please use my email adress

Dear radio lovers,
as you know, in recent years I have been involved in antenna analysis and experiments as well as new antenna and their calculations. A used but
as good as new OUTBACK2000 antenna I had "made" me, in order to utilize this capacitively. On the first try at 40m, I was really excited how easy it was antenna can couple. Then later in experiments outside the apartment. About 2 weeks later then drove on the Berlin "Mühlenberg" and the new
antenna tested. Shortwave ok until the 6m and 80m band. 6m had no contact over the tap and on 80 was a response to 2.4 and 6.4 MHz. I tried everything what was possible on the way, but these errors were not to be found in a hurry. 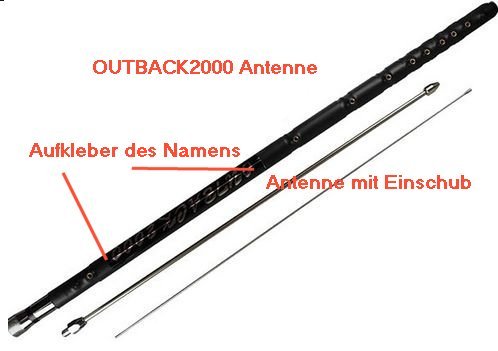 I remembered that a year ago on the same hill an amateur radio had annoyed about this antenna and 80m band, because no resonance at all the 80m band was possible! Ok, at home then my gauges are connected and the inductances measured. A total of about 205 μH and the coil for the 80m band 144μH ...... For a comparable antenna, the total inductance was 141μH ---> So the outback would have to go with the coil for 80m and the rest with the cable be shorted! Made ----- but: No response. Again 2.4 and 6.4 MHz! For me now partly an impossible state. I had the 6m connection
desoldering and also the last connection was not ok. Unfortunately I had to remove a part of the "heat shrink tubing". Ordered a new one. Ok, next problem was 15 ohms had to be measured from the last connection to the antenna end. Screw antenna - quasi the upper part - under the gas flame of the furnace made so hot that the lower part - the screw connection - fell off. Oh, horror, the constructors have indeed a messing screw with a steel tube STICKY! Have the terminals cleaned, one hole drilled and 3mm thread cut. Now connect the antenna to the slot with one screw. No resistance. well still find the mistake for the 80m band. Idea - remove the shrink tubing over the 80m bobbin and continue searching. First remove the label OUTBACK2000. Now I had the sticker in my hand. A thin aluminum foil with the name stuck on the 80m coil! Now it was clear to me. How can you turn on an RF coil stick aluminum strips? This is deadly for the HF!
Meter connected and received immediately at 80m resonance. That was the main fault of this antenna. With this sticker, the antenna continues to be sold without check if the antenna works with it. So - when buying such or similar antennas remove the aluminum foil of the description buckle, so that the operation ok
is.